Our Tom Kha Soup or Thai Coconut Soup recipe is the vegan version of the common Tom Kha Gai. Made with a homemade chilli paste, our recipe has a unique flavour yet keeps the aroma and taste of the traditional recipe.

Tom Kha is one of the vegan recipes that we learnt how to cook while in Thailand and is together with Khao Soi our favourite choice when it comes to creamy soups. If you have been following us for some time now, you'll probably know that Thai cuisine is one of our favourites.

This is one of our favourite soups as it combines the flavours of a homemade Thai chilli paste and aromatic and tasty vegetable broth made with galangal, kaffir lime leaves and lemongrass, with the creaminess of the coconut milk, spicy flavours, the saltiness of soy sauce and the tanginess of some freshly squeezed lime.

Our Thai Coconut Soup and this Vegan Chop Suey are our favourite options for a rainy day or for those days when you want to eat something light yet comforting. Served with some rice on the side makes for a perfect main meal too. You won't need to go to a Thai Restaurant to enjoy this creamy and sour coconut soup anymore.

Our Tom Kha Soup is:

What is Tom Kha?

Tom Kha would translate to galangal soup. Galangal root is a spice from the same family as ginger. Tom Kha soup consists of a spiced broth made with aromatics such as lemongrass, kaffir lime leaves and of course galangal combined with coconut milk.

Traditionally, this sour soup is made with chicken (Tom Kha Gai) but this is our vegan version which includes plant-based protein such as mushrooms and tofu and no fish sauce.

Both Tom Kha and Tom Yum are hot and sour soups prepared with fragrant spices. The main difference is the coconut milk added to the Tom Kha, which makes it a creamy version of Tom Yum Soup. As well, Tom Yum is normally served with shrimp while Tom Kha is served with chicken (Gai)

Don't worry if you don't have many of the ingredients on the list. You can find online Tom Kha packs that contain almost everything you need. We have seen a similar frozen pack in our local Asian supermarket, which is super handy if you don't want to buy a big amount of galangal and lemongrass.

Make the chilli paste. Using gloves, cut the red chills, remove the seeds and roughly chop them. Roughly chop the carrot, shallot and garlic. Heat some coconut oil in a pan and add the ingredients. Once they start to brown, transfer them to a blender jug, add soy sauce and blend until you have a smooth paste.

How to serve our Vegan Tom Kha Soup Recipe

This Thai Soup is normally served as an appetizer or starter. It's a great option for a light lunch or dinner and it can be served as a main dish as well if you want to serve it as a portion of jasmine rice or rice noodles.

Add some fresh cilantro and drizzle some lime juice before serving.

For spicy food lovers, you could serve some chilli oil on the side, chilli flakes or sriracha.

Keep any leftovers in the fridge for 2-3 days and reheat using a microwave or a pot. 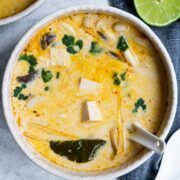