Eating a Morrocan Vegetable Tagine is such a wonderful way to finish up a rainy or cold day. The steamed vegetables that have been slowly cooking in a spiced broth using a Moroccan tagine will warm up your body in the most delicious way.

A tagine or tajine is, as well as the name of the dish, the name of the pot in which it's cooked. Tagines are made out of clay and consist of two parts: the round base which is filled with vegetables and broth and a cone-shaped lid to keep the steam inside allowing the veggies to slow cook.

Tagines are normally prepared with meat, but this vegan version is really tasty and filling so you won't be missing the meat. Our vegetable tagine is made with potatoes, fresh vegetables such as aubergine, pepper, onion, carrots and tomatoes, chickpeas, salty black olives, preserved lemons and a spiced broth that brings the whole dish together. We serve our Morrocan vegetable tagine with a mouth-watering tahini sauce.

Apart from the tahini sauce, the ingredients used in this recipe are really cheap. A vegetable tagine is a great way to feed the whole family a healthy meal at a really low cost.

How to prepare the Moroccan Vegetable Tagine

All you need to do is cut the vegetables you are using, and form the different layers. The vegetables are best to cut into big chunks as they will be cooking for a long time. They will look and taste better!

When making our vegetable tagine, we add Morrocan black olives which are really salty and preserved lemons in between some of the vegetable layers to give our tagine a unique taste. The olives give the dish and the broth the perfect saltiness while the preserved lemons add a touch of tanginess. Some people like adding dried fruits to add some sweetness as well.

Once the tagine is filled with your favourite veggies and pulses, the most challenging part is done.

Next step, is to prepare the spiced broth that the veggies will be cooked in. A tasty broth is the key to making a delicious tagine as it is what will flavour all the veggies.

Fill a jug with hot water and add Ras el Hanout, turmeric, cumin seeds, chili flakes, salt and a dash of olive oil. Mix well, and pour the broth into the tagine. Ras el Hanout is a spice mix, meaning that you can get a really good quality one containing more spices or a cheaper one that will be less flavourful.

Preheat the oven to 150C. Cover the tagine with the lid and leave it cooking for at least an hour. The tagine needs to be cooked at a low temperature for a long time. While cooking, try to not open the lid as the steam will evaporate and it can impact the flavour of the dish.

While the tagine is cooking, prepare the tahini sauce and the side dish to be served with your meal.

To prepare the tahini sauce, simply combine tahini with lemon juice and water and mix well until desired consistency.

To serve with our tagine, we love some freshly baked bread such as flatbread or Whole Wheat Pita Bread. Other options would be serving the tagine with couscous (not gluten-free), rice, quinoa or any other type of grain. 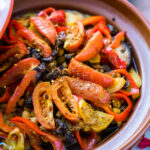 Ingredients for the Tahini Sauce