The fall season has started and we are ready to make the most of it! Is there a better way to start this beautiful season than with a hearty and delicious Vegan Apple Crisp?

Our love for apples started after having our little son Luca. We have been cooking more with apples and rediscovering this amazing fruit. We use it in salads, marmalades, desserts, simply as a snack or to make Apple Sauce and have it as a topping on our Overnight Oats, Pancakes or morning porridge.

Our Vegan Apple Crisp is the latest addition to our favourite desserts list. We made it while Astra's parents were visiting us in Mallorca and even if the weather was still a bit warm, we all enjoyed it a lot, especially Luca! Our recipe contains just ¼ cup of brown sugar and a little bit of maple syrup for the sweetness, so you can prepare this recipe for your little ones as well. You can always substitute the sugar for more maple syrup or date syrup or any other natural sweetener.

Apples, of course. Peeling and chopping the apples is what takes the longest in this recipe so you can already imagine how fast you will have your vegan apple crisp ready to enjoy. Our favourite type of apples when it comes to baking is Jonagold apples. For our apple crisp, we peel the apples but whether to peel them or not, it's totally up to you!

Spice mix. We use cinnamon and nutmeg. They give the dessert a lovely fall flavour and fragrance.

Lemon juice. Adding fresh lemon juice will give your apple crisp some extra tartness. We use our lemon squeezer so no pips go inside the mixture.

Maple Syrup. There is no need to add sugar or a big amount of sweetener into the filling as baked apples are already sweet enough. We find that adding a little bit of maple syrup is already enough.

Rolled oats. Adding rolled oats into the topping mixture will make the apple crisp extra crunchy. This dessert is better eaten right after baking. You can save the leftovers for the day after but it won't be crunchy.

Vegan butter or Coconut oil. For a more nutritional dessert, you can use coconut oil or even combine both ingredients.

Brown sugar. Many recipes include lots of sugar such as one cup. We find it way too much. Using a ¼ cup of sugar is more than enough as the apples are already going to bring the rest of the sweetness you are looking for. For even healthier apple crisp, substitute the brown sugar for maple syrup, honey, date syrup or another natural unrefined sweetener.

Cinnamon. Finish your topping with some extra cinnamon powder.

How to prepare the Apple Crisp Step by Step

Peel and chop the apples. Transfer them into a mixing bowl and add the cinnamon, nutmeg and maple syrup. Stir to combine and transfer to a greased baking dish.

Combine the whole wheat flour, oats, brown sugar, cinnamon and cubed vegan butter or coconut oil in a separate mixing bowl. Mix with your hands until the mixture resembles coarse or pea-size crumbs. Spread the mixture over the apples evenly and bake in preheated for about 40 minutes at 180C.

Serve warm. Vegan vanilla ice cream goes amazingly good with our vegan apple crisp. You can top the apple crisp with pecan nuts to give it an extra crunch. 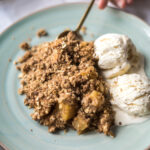